From Dairy Farm to Country Club

Celebrities playing at Hop Meadow over the years include:

Governor and U.S. Senator George McLean (1857 – 1932) was a generous philanthropist.  He obviously loved Simsbury,its land and its people.  Upon his death he left a sizable estate, which included several
tracts of land.  He designated one be called, “McLean Game Refuge” and set aside funds for the protection and propagation of wild birds, game and fish.  Excluded from the game refuge were the land and buildings whih he called the “Home Farm.”  He willed that when the trust fund reached a certain level, a home or hospital be built on a portion of this land.  It was to be called the “McLean Home” in honor of his mother and aunt.  A part of the “Home Farm” was called the Holly Farm and was leased out for tuse as a working dairy farm with Holstein cattle.  It occurred to Jonathan Eno, Vice President of the Simsbury Bank, that the idea of a golf course on part of the Home Farm could be a solution.  He talked to John Ellsworth, then President of Ensign Bickford who was interested, and Orrin Kilbourn, a Simsbury land owner, who not only agreed but decided to help.  Thus began the story of Hop Meadow Country Club.

In June of 1961, the membership adopted the name Hop Meaow as this was the origninal name given to the area in the 1600’s.  On July 12, 1961, the first Board of Directors was eleted with Richard Berry as President.  The McLean Trustees approved a motion to begin work on the golf course, a skating rink, tennis courts, and pool as well as remodel the barn as a clubhouse.  On August 31,  President Berry invited all members to a picnic/ground breaking ceremony on what is now the 12th green.

On January 18, 1962, the Certificate of Incorporation was filed.   On   June 15th, the Harford Courant was present to capture a   photo of   President Berry teeing up a first (gold) golf ball on   Opening day.     The first Women’s Tournament took place on   August 2nd with 24   ladies participating and on August 7th, the   se on nine holes were   started.  Member involvement and   camaraderie abounded with   “Pebble Picking” parties to rid   fairways of loose stones and tree planting parties, where 300 shoulder high trees were planted around the course.

After some consideration for building a new structure for the clubhouse on top of the   ridge, efforts went back to remodeling the existing barn.  In January of 1963, the   House Committee approved  color schemes for the clubhouse and work to be done on   the pool house and snack bar.  On April 9,  the original nine holes (some front, some   back) were open for the season and the seond nine were officially opened in July.   The Clubhouse is offcially open for business.

In March,  a three-day Member-Guest for August 14 – 16 was announced.  The cost was $25/team to include practice round, two golf balls and lunch Friday and Saturday.  Happy Hour was 4 – 6pm Wednesday through Friday:  all drinks were 52 cents.  Full tournament schedules existed for ladies as well as men and in July, we began leasing new electric carts that would be stored and charged where the club offices are now located.  The club activities calendar was in full swing with danes, dinners and a variety of themed events.

The final four years of the decade were the decade’s fine tuning years.  As membership growth permitted, improvements to the course were made.  In 1967,  Hop Meadow joined the Connecticut Women’s Golf Association (CWGA).  In 1968,  certain areas of the club’s facilities were expanded, plus the complete furnishing of all areas including carpeting and air conditioning.  In the summer of 1968,  the ladies of Hop Meadow captured the Pro-Ladies Golf title and 1969 saw the inaugural “International Day Trounament” werhe eah foursome dressed in appropriate ethnic attire that represented the country of their choice. 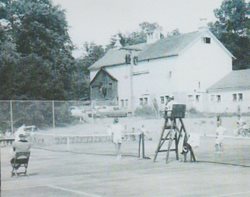 As the club entered a new decade, many of the trees planted eight and nine   years earlier by a dedicated membershiop, began to mature and the Golf   Course at Hop Meadow took on miu h of the scenic beauty that exists today.   In 1972,  a ceiling fan was installed in the mixed grill by a dedicated member.   The fan served to remove smoke from the room and rpovided some relief   from the heat when the sun was on that side of the building.

Also in 1972,  President Dick McCormick led the effort to approve investment   in an automated sprinkler system for the golf course.  Once installed,  it was a major tranformation in the development of the club.

In 1976 a new tennis court was added and in Early 1977,  Ken Doyle replaced Ed Kowalski and became the second head pro in the history of the Club.

The economy was in a crisis, with the most challenging financial year of the decade coming in 1979.  The national economy, mired with woes and ridiculously high interest rates, made membership levels a daily challenge.  To make matters worse, the gasoline shortage resulted in out announcing a reduced mowing program. 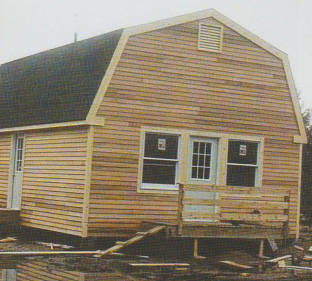 The Club’s 20th Anniversary celebration was held on July 15,   1981, with golf and tennis trounaments followed by a Dinner   Dance at the pool.

In May, 1981, Hop Meadow hosted the NCAA Division II   Championships.  The tournament was televised on ESPN and   included a three-hole playoff to determine whih three players   would go on to the National Division I Tournament.

In 1982, the Club added a canopy over a new front entrance,   construction of a tennis pro shop, and extensive work was   completed on the pool.  In 1984, two new tennis courts were built.

with a pool party where the enthusiasm of 270 members shined in the pouring rain.

In 1988, improvements were made to the pool, new Pro Shop/Swimming Pool building was completed, and the first tee was reconstructed to eliminate danger from the practice range.

The decade began rife with economic problems, which had descended upon the nation as a whole, and Connecticut, in particular, which was facing serious problems in the defense, insurance and finance industries.  In 1991, Hop Meadow celebrated its 30th Anniversary with a “glal weekend” in July featuring a dinner dance, golf, tennis and swimming activities.

In November, 1993 th membership approved a reised proposal to reno ate the main Clubhouse in a three phased project.

The spring o ’95 arrived and the first phase of the cloubhouse renovation was completed on time.

in 1997,  the Club, following a growing trend nationwide, went to soft spikes.

In 1998, following another nationwide trend, the Clubhouse became a non-smoking facility.

During the 2001 season, Hop Meadow opened a new patio dining area at the pool/golf snack area, completed upgrades to the pool locker rooms, and the paddle courts were completed.  New golf trophy boards were created and put on display in the pub.

Golf course improvements included redoing the area around the putting green, scorboards and driving range and rebuilding the chipping green bunker.  A new irrigation system continued to be a priority capital improvement for the course but had to remoin on hold.

Clubs Nationally continued to struggle with membership levels and Hop Meadow was no different.  Though our challenge grew greater with the opening of Wintonbury Hills and Gillette Ridge, membership grew to 522.  Other highlights were the tree removal program and “Stump Fund” initiative, and the development of a framework for a new lease with McLean.  A new irrigation system remained just out of reach.

In 2008, pool resurfacing project alonog with the installation of a new diving board, tile and deck repair and locker room improvements are completed.